The Armenian Church is situated on Church Road in between Armanitola and Mitford Hospital. The early history of the Armenians has been given above. Here an account of the Christmas celebration in the church is given, as witnessed by Lieutenant Colonel C.J.C. Davidson, in 1840: “I entered the Church through a verandah about fourteen feet wide. The floor of the interior of the building was divided into three parts; one, enclosed by a railing, for the altar; a central portion into which two folding doors opened; and another, railed off, which was exclusively occupied by Women and children having a gallery over it. The altar stands in a semicircle about four feet distant from the wall; it is made or appears to be made of wood and is raised to the height of about ten feet by steps. These steps sustain twenty-four wax candles each three feet long, and also a number of small crosses of some gilt or shining metal. Although it was a bright sunshiny morning the candles were all burning. 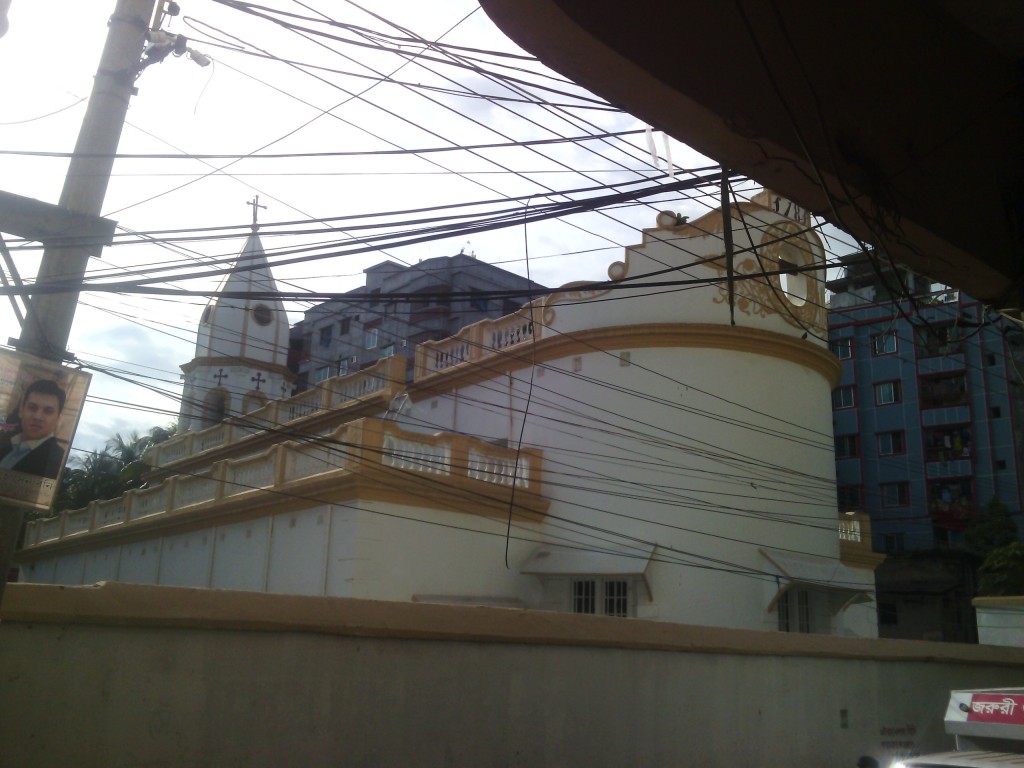 “In front of the altar, but a little to the left side, stood the officiating priest, a man of about fifty years of age, wearing spectacles. A piece of his scalp was shaved in a circular form, to the diameter of two inches and a quarter precisely. His under-garment was richly ornamented with embroidered silver rosettes and had a rich border of similar work at the bottom. His outer vest was a khinkhwab (or golden tissue) cloak, having at the bottom of it a border four inches wide and massive quite stiff with embroidery. He stood at a small reading desk, close to the central part of the church, and before him was placed a large receptacle of holy water. 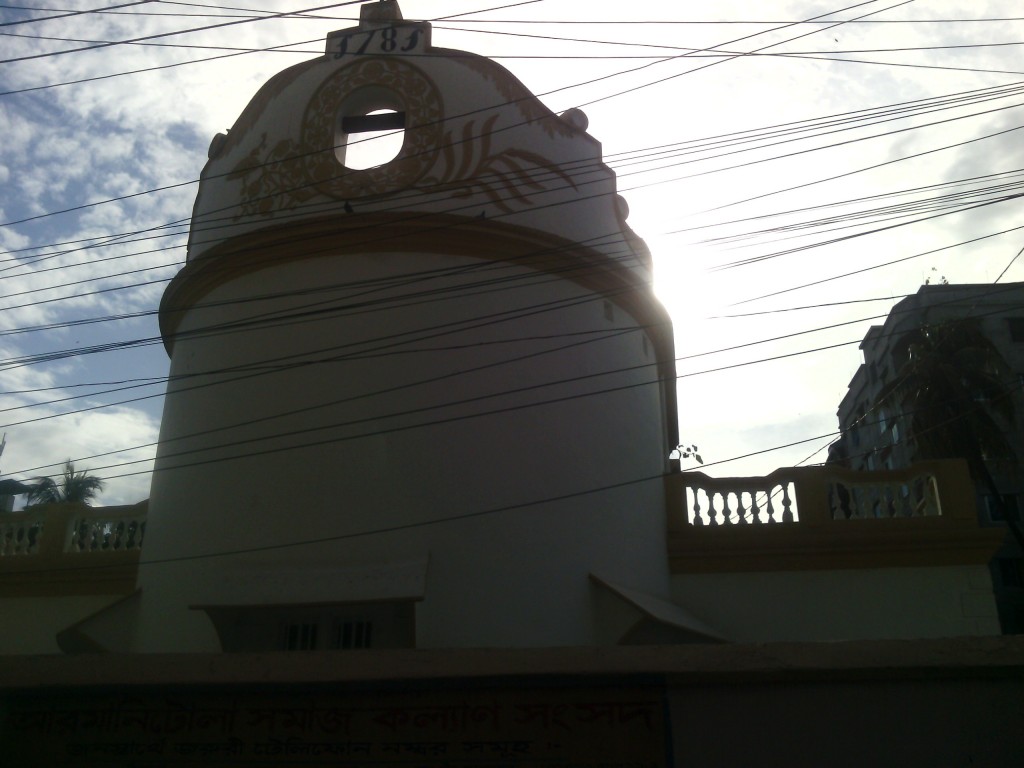 “The service which this priest read seemed to proceed with wonderful rapidity and during its progress he held in his left hand an instrument of thin silver or tin plate, having what appeared to mc a picture in its centre, with diverging radii. This was occasionally elevated. While reading he was joined every now and then by four or five other persons, chiefly youths wearing long silk coats of’ a cinnamon colour with crimson silk ornaments on the shoulders, and having each a crimson cross down the centre of their backs. One of these occasionally repeated “Ameen, Ameen,” in the same nasal tone which distinguished the reading and chanting. On each flank of the desk stood a boy who held a rod in his hand to the end of which was attached a lighted candle in a lantern; while no less than twelve wax candles were burning round the desk…. 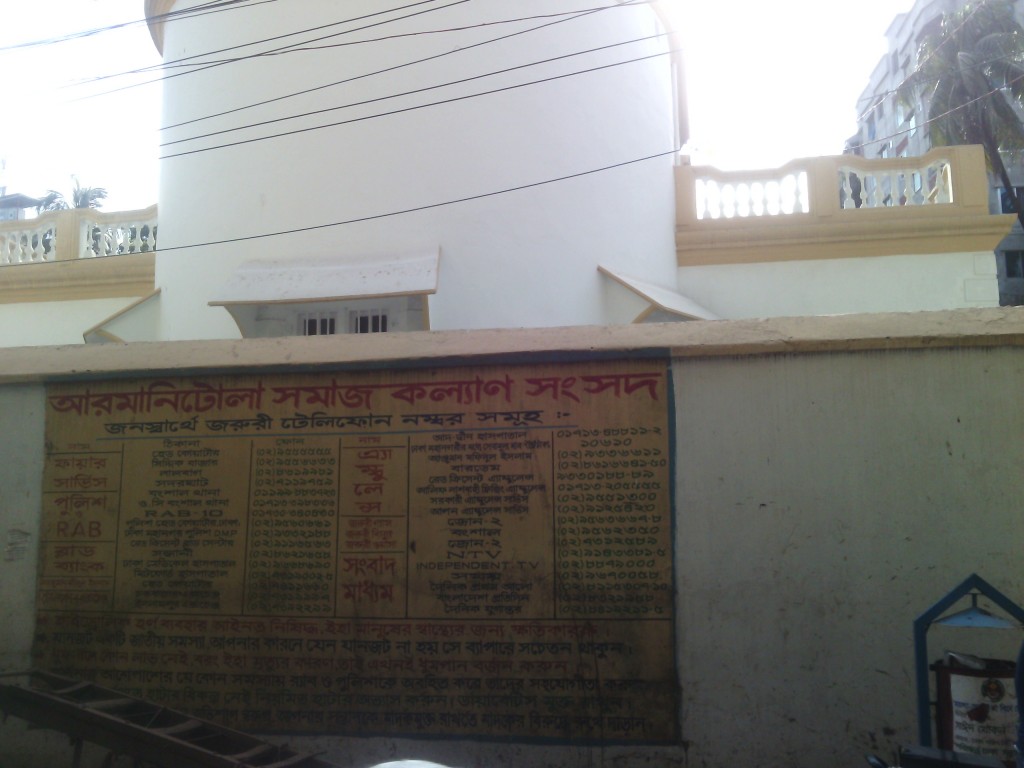 “When the reading was finished the priest left the desk, walked towards the altar and placed upon it the silver instruments before described; then descending the steps he brought back the book and placed it on a moveable stool covered with dark crimson cloth, along with another instrument, in front of the railing, which separated the altar part from the centre of the church. In a few minutes of the male part of the centre of the congregation… advanced to the railing and kissed the silver cross on the hook and like-wise the instrument. Little children were then brought or carried up; and during this ceremony phials, common beer bottles, silver cups, etc., were handed to one of the assistants at the desk who filled them with the holy water and returned them to their owners.

“When the service was ended I left the church and found that the priest had entered the verandah through a side door and was occupied in reading a service from a book over several tomb-stones covered with the Armenian characters; and then I marked that a small hollow in the floor, less than the size of a tea saucer at the head of each of the tomb-stone, was filled with wood ashes and cinders.