Dated from the late 17th century, Fort Aurangabad is an interesting relic of Mughal military architecture, belonging to the most glorious period of Dhaka’s history. However, excepting some of the gates and portion of the battlemented wall not much of it is left for the posterity. The existing fort consists of two impressive gateways on the north and the south, about 800 feet apart. It is about 2000 feet long east-west, and there are bastions between We southern gate and the south-western corner and most of the western side. Dr. Nazimuddin gave a graphic description of this picturesque monument. He writes, “It occupies the south western part of the old city, overlooking the Buriganga on whose northern bank it stands as a silent sentinel of the old city. Rectangular in plan, it encloses an area of 1082 feet by 800 feet and in addition to its two graceful lofty Gateways on the south-cast amid north-cast corners and a subsidiary small unpretentious gateway on the north, it also contains within its fortified parameter a number of splendid monuments, surrounded by attractive garden”.

The Lalbagh Fort is not a siege fort; rather it is a palace-fortress, duly fortified for defensive purpose. Over the defenses are terraced wall, pierced with a number of rectangular door openings and decorated, on the inner side with sunken panels. Between the southern gate and the south-western corner there are five semi-octagonal bastions, filled with earth to rampart level. 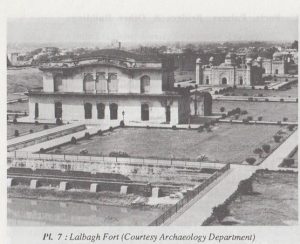 Though structurally incomplete, the Southern Gateway was magnificently planned and brilliantly executed. In conformity with the characteristic features of the Mughal style of architecture, it is a three- storied building, the upper storey having been left incomplete. The facade is dominated by four-centred arch, flanked by slender octagonal minarets. To the left and the right of these minarets are to be seen a deep plastered semi-octagonal alcove below and an oriel window in two stages above with a cupola as its crowning feature. The corners of this embellished gateway are crowned with small domed kiosks, two of which still remain. The central archway leads to a square domed hail having guard rooms on the sides. Aulad Hasan writes, “Amir-ul-Umra nawab Shaista Khan did not continue the work, the fact that his daughter, Bibi Pan died while it was in the process of construction, leading him to consider it unlucky”. Thus when Prince Azam left Dhaka to join his father Aurangzeb in his campaign against the Marhattas, Shaista Khan temporarily resumed the work and left it incomplete when his daughter and wife of Prince Azam suddenly expired.

There are also a few water forts in and around Dhaka, erected to check riverine inroads of the Magh and Portuguese pirates. Dated from the 17th century, these are the Idrakpur Fort in Munshiganj, Sonakanda Fort near Bandar, Khizirpur or Hajiganj Fort in Narayanganj.